A coma patient was in for 3 months; , and developed a pressure sore in the coccyx area, despite the use of special anti-pressure sore mattresses. The wound was extremely wet and malodorous. The size of the wound was +20x20cm and 3 cm in depth.

At the start, the wound was extremely wet, malodorous, and sloughy with necrotic tissue. The wound was first cleaned with saline. The ointment was applied after and covered with a calcium alginate and then fixated with a regular gauze. This was done daily.

The fast debridement and malodour removal can be attributed to the autolytic debridement activity of the L-Mesitran Ointment. Especially, since the patient developed an infected wound despite the fact that he was administered systemic antibiotics from the admittance to the ICU as part of the standard hospital protocol. The ointment was able to heal the very large infected pressure sore on the coccyx area in approximately 5 months without any adverse effects. 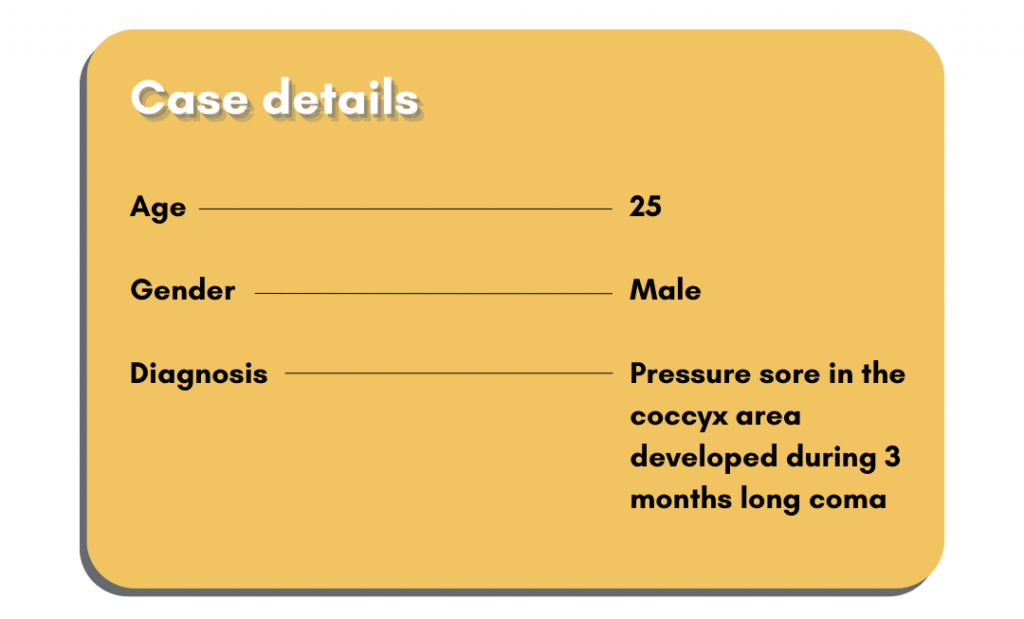 L-Mesitran Ointment is effective in treating the pressure sore.

After roughly 10 days of this treatment with L-Mesitran Ointment, there was no more malodour, the slough was almost cleared and the necrosis disappeared as well. A fortnight later, the calcium-alginate was temporarily replaced by a collagen dressing. The combination worked well and granulation was observed. The wound edges were firm and there was no sign of maceration.

Throughout the treatment with the L-Mesitran Ointment, the wound closed nicely, filling the complete wound bed in approximately 5 months during which the patient was still in coma at the 424th General Military Hospital in Thessaloniki, Greece. At the end of the treatment, some hypertrophic scarring was noticed.

At the beginning of the treatment almost one 50g tube of L-Mesitran Ointment was used per day, which was reduced as the wound started granulating and epithelialising. The dressing changes were easy to apply by the nurses and no adherence to the wound bed was observed.

We use cookies on our website to give you the most relevant experience by remembering your preferences and repeat visits. By clicking “Accept”, you consent to the use of ALL the cookies. Read More
Cookie settingsACCEPT
Manage consent

This website uses cookies to improve your experience while you navigate through the website. Out of these, the cookies that are categorized as necessary are stored on your browser as they are essential for the working of basic functionalities of the website. We also use third-party cookies that help us analyze and understand how you use this website. These cookies will be stored in your browser only with your consent. You also have the option to opt-out of these cookies. But opting out of some of these cookies may affect your browsing experience.
Necessary Always Enabled
Necessary cookies are absolutely essential for the website to function properly. This category only includes cookies that ensures basic functionalities and security features of the website. These cookies do not store any personal information.
Non-necessary
Any cookies that may not be particularly necessary for the website to function and is used specifically to collect user personal data via analytics, ads, other embedded contents are termed as non-necessary cookies. It is mandatory to procure user consent prior to running these cookies on your website.
SAVE & ACCEPT