A 1.5-year-old dog was presented to the clinic with soft tissue and bone lesions at the lower extremity of the right hind limb, traumatic in origin. Degloving of the wound was observed shortly after presentation, and the dog was confirmed to have comminuted fractures of the metatarsal bones on digits II and III, which were amputated. The resulting wound was partially covered with bandages and changed every 3-4 days, with no improvement. The dog was treated with Meloxicam for the first 3 days and Amoxicillin and Clavulanic acid for the first 7 days after the trauma. Thereafter, treatment consisted of a triple antibiotic ointment (Tetracycline, Erythromycin, Neomycin) with woven gauze as a secondary layer and self-adhesive wrap as the exterior layer for a week. This treatment showed no improvement and the patient was referred to the university clinical and treatment with medical grade honey (MGH) was started.

A wound lavage was performed after each bandage change, using Ringer’s Lactate. Bandages were changed every 2 to 3 days, along with a new application of L-Mesitran Soft.  A non-woven gauze was applied as a secondary bandage, followed by a tertiary layer of Soft Orthopedic Cast Padding, and gauze wrap and self-adhesive cohesive wrap for fixation. These materials were used till complete healing. From day 19 to day 35 the owners applied the bandages at home following the same pattern as performed in the clinic. No antibiotic was given during the treatment with L-Mesitran. 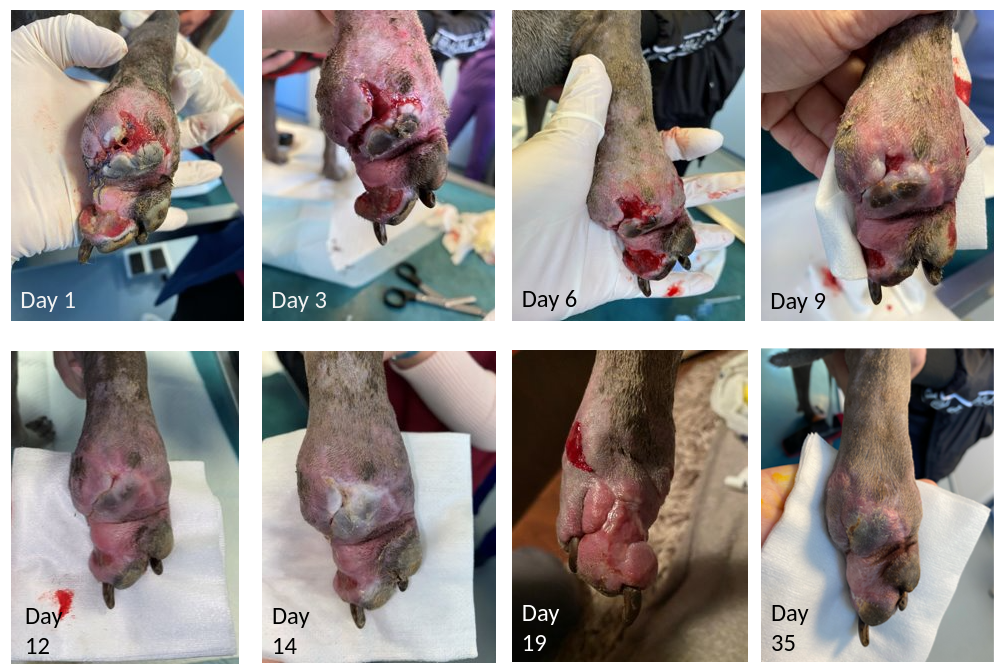 Figure 1: Wound healing progression of a traumatic wound on the lower extremities of the right hind leg.

The wound had necrotic tissue and was heavily exudating on day 1 of treatment with MGH. Additionally, the wound showed signs of being heavily infected. On day 9, granulation of the wound was clearly visible with necrotic tissue and signs of infection being resolved. Further epithelization of the wound continued on day 14, with additional collagen formation. Granulation was in an advanced stage on day 19 and on day 35 the wound was fully closed. HAAR.

The NSAID Meloxicam and antibiotics Amoxicillin and Clavulanic acid were administered subcutaneously, along with a triple antibiotic dressing (Tetracycline, Erythromycin, Neomycin) prior to treatment with L-Mesitran Soft, with no improvement. Because the wound showed signs of heavy infection and the wide-spectrum antibiotics not being effective, the wound possibly was infected with multiresistant bacteria. After application with L-Mesitran soft (which contains Medical Grade Honey (MGH)), the infection was fully resolved. L-Mesitran Soft is known to exert antimicrobial activities via multiple mechanisms, being able to eradicate (multiresistant) bacteria, even when persisting in biofilms (1-4). Digits II and III of the metatarsal bones were fractured and had to be amputated. In amputee cases, the use of MGH as an earlier line of treatment can enhance healing and prevent exacerbation of the injuries and potential subsequent amputations (4). In another case, MGH products lead to an efficient and rapid healing process, with positive influence on the extent of trauma and hemostasis. MGH also allowed to manage low to medium exudate levels while keeping a moist wound bed for a beneficial wound healing environment (5).

Gunshot wound in a dog

We use cookies on our website to give you the most relevant experience by remembering your preferences and repeat visits. By clicking “Accept”, you consent to the use of ALL the cookies. Read More
Cookie settingsACCEPT
Manage consent

This website uses cookies to improve your experience while you navigate through the website. Out of these, the cookies that are categorized as necessary are stored on your browser as they are essential for the working of basic functionalities of the website. We also use third-party cookies that help us analyze and understand how you use this website. These cookies will be stored in your browser only with your consent. You also have the option to opt-out of these cookies. But opting out of some of these cookies may affect your browsing experience.
Necessary Always Enabled
Necessary cookies are absolutely essential for the website to function properly. This category only includes cookies that ensures basic functionalities and security features of the website. These cookies do not store any personal information.
Non-necessary
Any cookies that may not be particularly necessary for the website to function and is used specifically to collect user personal data via analytics, ads, other embedded contents are termed as non-necessary cookies. It is mandatory to procure user consent prior to running these cookies on your website.
SAVE & ACCEPT